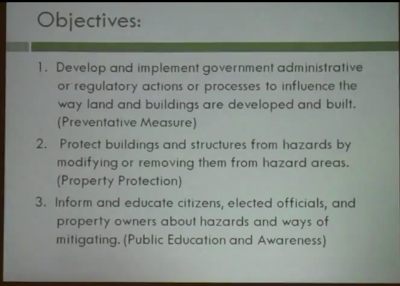 Public: It says the way land and buildings are developed.
Is that government land buildings or is that privately held land and buildings?
City of Davenport: That would be both.
http://www.youtube.com/watch?v=7baqocvKZRc&feature=player_profilepage#t=74s
City of Davenport: In a sense if this were adopted as part of a comprehensive plan, then it gives it a little more impetus, I guess would be one way to say it, to say, Okay, here's another thing that says you should be doing this.  And it's for the betterment for basically the health and safety of the people that live in Davenport, or in this case Scott County.
Scott County: By the very nature [these plans] sometimes have competing or contradictory aspects to them.  And that's up to the political process to make a determination.
There is a cost benefit analysis associated with it and what we're trying to do with this plan is to identify, to a certain extent, the low hanging fruit. The aspects of hazard mitigation that can be done easily, the least expensively, and with the least intrusion into people's lives and the use of their property.
But then as, measures get, uh, more complicated, then you get into those difficult decisions of okay, do we spend a million dollars and do we really believe it's going to save us $5 million dollars over the next five years? You know, some people say yes, some people say no, it's a good use of funds other people say no it's not.
It's, you know, you're cooking those numbers. So, those are the types of things that this plan will assist in identifying. But, as the term you used, locked in, I don't feel any jurisdiction will be locked into it.  It's made to assist us. It's made to help us.  If it helps us we'll use it. If it doesn't, I'll be advocating changing it
Public: If the plan is in writing and it's there to assist the leaders and the politicians and the P&Z and the staff, is there a downside to not moving it forward to Iowa Homeland Security, so they can approve it and they move it to FEMA? What if just have it on the books and you don't submit it up the ladder, and people can still consult it?
Scott County: Then you don't qualify for a funding source.  They control it.
Bi-Sate Regional Commission:  They specifically ask, they just actually released notice that there's federal funding available for mitigation, and I looked at the notice of intent, this is what you have to submit in order to get an application. And they specifically ask, do you have the hazard mitigation plan and where does this proposal that you're sending us fit in there. What mitigation action is this fulfilling?
Or they won't even move on past that.
City of Davenport: Basically in that scenario, FEMA is wanting the jurisdictions, if you're going to be applying for funding and this taxpayer money is basically what it is, they want to make sure that you have looked at what you are doing, your planning your actions within a whole realm of other things so that you're basically getting the biggest bang for the dollar that's being spent. That's what they're looking for.
Scott County: And other jurisdictions also. They want to make sure that as states and counties across the nation, that they do that.
Bi-Sate Regional Commission: And I want to say that not every action in this plan is something that is funded by FEMA. Some of these are things that are already in place. They could be just a change in documentation of what they're doing. There's things…there's a lot of public education involved with this plan. Just so people have a better understanding of what is out there. This isn't just a plan saying how do I get money from FEMA. There is more to it than that.
Scott County: And I think too that is evidenced by folks that are hearing asking questions about it and it's raising awareness that there are methods that you can use to mitigate hazards and whether that's a good thing or a bad thing is up to the democratic political process to determine.
Public: What I think the concern citizens have regarding is ceding authority, because they dangle the carrot out about the funding, for some.. whatever it might be… you've looked up the Notice of Intent. Oh there's funding over here, and so forth… and through that process that we, sometimes inadvertently, cede authority to somebody outside of our jurisdiction.
Scott County: Then, I would submit those comments in writing.