DAVENPORT, IOWA | TUESDAY NOVEMBER 2, 2010 -  The new alternative to the Democrats and Republicans, Iowans For Accountability, or IFA, will be celebrating history being made in Scott County as the first Non Party Political Organization ever on the ballot for the County Supervisor positions. There are three seats at stake this election and Jesse Anderson, John Riley and John Green are vying for all three spots, representing IFA.

This evening, beginning at 8:30 p.m. the IFA candidates, delegates, campaign team and supporters will be gathering at Front Street Street Brewery in downtown Davenport.  "We are excited not only about what we've accomplished as the independent voice for Scott County residents, but we are also excited about what happens moving forward, regardless of the election results. We've built the template for accountability in Scott County, and it is desperately needed at the County Supervisor level," says IFA Chairman Michael Elliott.

"Our Supervisors have not been supervising. And tax payers are facing a 20% increase in their property taxes, with no end in sight, thanks to the rubber stamping of both parties to date of projects like SECC911. But, ultimately it is the people's responsibility to hold these supervisors accountable, and now IFA is here to help the people with that duty."

Voters interested in meeting the IFA candidates and leadership are encouraged to visit Front Street Brewery after 8:30 p.m.

Jim Fisher introduces IFA to his listeners on Wednesday afternoon, October 27th, 2010 in a live in-studio interview with Scott County Supervisor candidate, Jesse Anderson. The two discuss how and why IFA was formed, the SECC911 project and why voters should support the independent team of Anderson, Green and Riley on November 2nd.
Click here to listen to the MP3 audio file.
No comments:


DAVENPORT, IA – OCTOBER 20, 2010:  On Tuesday, two weeks to the day prior to the election, candidates for Scott County Supervisors, running on the Iowans For Accountability (IFA) ticket, along with members of the IFA Central Committee, hosted a news conference at the Downtown Davenport Public Library. (The video archive of this news conference is online at YouTube here.)


The public, as well as the media, were invited to attend and meet and question the candidates after the presentation.

The 30 plus page IFA presentation projected on the screen Tuesday, is available online at www.ScottCountyIFA.com or downloadable as a pdf by clicking here.

The group outlined how and why IFA formed and was placed on the ballot in August of 2010, a first of its kind event in Scott County’s history — and potentially in Iowa’s history.

IFA found that historically the Scott County Board of Supervisors have avoided scrutiny, surrendered authority and grown government.

IFA reported that over the last ten years population has grown 5% but annual taxes collected have ballooned 76% and expenditures have grown 59%, since 2000 to over $70M.

IFA also outlined how the Board of Supervisors justified creating the SECC911 consolidated emergency dispatching project as saving taxpayers $4.6M over 20 years. IFA compared and contrasted what taxpayers were told by the Board in 2007 with what the results have been in 2010. Such results include $28M in long term debt, a special levy not subject to caps on taxes and no ceiling on future indebtedness, and a 20% increase in property taxes.

The Scott County Board of Supervisors has five members, who are elected on four year staggered terms.

In 2010, there are three of the five seats up for election.

Here are the profiles and position statement for our three candidates.

Our Candidates on the record...

“There is a ‘right size’ of government that is smaller and less intrusive to its citizens. We need to determine that size and get to it as quickly as possible.”

“ everyone in the private sector is suffering one way or another, and the prospects do not appear bright if we stay the current course.”

“...someone at some level has to tighten the purse strings. And that’s what I hope to do.”

IFA was formed by independent, liberty-minded adults of all ages, in Scott County, who are focused on restoring our county, state and country to the constitutional principles of limited government, free enterprise and low taxation.

The Signs Are Everywhere: Time for Accountability!

IFA will have two sided large 4x8 barn signs suitable for your high profile location as soon as Saturday September 25, 2010. If you are interested in having one of these signs (or smaller ones coming soon, too), then please email Jesse Anderson andersonforsupervisor2010@gmail.com or call  (309) 235-5813. 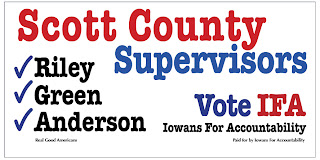 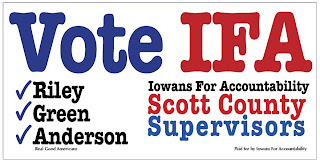 Did you know that Iowa has the highest tax rate in the world?

The most expensive "thing" isn't necessarily bad. That is, as long as you are receiving the highest quality product in return for your investment. Which, leads me to the current state of the public school system in Iowa.

Many times as I've mentioned to friends or strangers that Iowa has the most expensive government per capita in the U.S. I've often received an admittedly shocking defense of those high taxes that usually goes something like this: "Iowa has some of the best schools in the world so of course our taxes are high." I can understand why someone might think that. After all, Iowa has historically been known for it's world class schools. Unfortunately, that might not be so true anymore.

I see two heartily logical explanations:
1. The schools listed above are broken or
2. The No Child Left Behind program is broken.

You don't have to buy both options but you have to agree with one of them. Somebody has to be right and either way you look we have a problem that needs to be addressed with a vengeance. If you agree the schools are broken then we need to fix them. If you believe that No Child Left Behind is a failure then we need to find a way to opt out of it. What we don't need is higher taxes to execute either of those options.

We already have a reference point for greatness in our schools as we've been there before. We already have arguably more resources than anyone else in the world to do it. It seems as though all we really need is better Leadership to take those pieces and make them whole again.

-Jesse Anderson
for Scott County Board of Supervisors

In the works for two years, the multi-million dollar project hired contractors from out of town, instead of local union members.

A union spokesperson says they put in a bid last year, and even offered extra money out of their own pockets to keep the jobs local.

"We're here to let the public know that we have out of town contractors in this area taking local jobs away from local workers and then when they leave here, they end up going back to perspective homes and spend our tax dollars which should be spent here." says spokesman Curtis Wisely

The director of the Scott County Emergency Center said he had no idea union members were picketing. Local Union 81 said they haven't been in contact with the county for at least three months.

The communication center is supposed to be finished by December. The county will then work to install all the equipment. The center should be operational by next spring.

What do Scott County, Iowa and Chicago, Illinois have in common?
Not much except that a company from Chicago is about to get a $100,000+ contract paid for by Iowa taxpayer dollars.

For what, you ask?
An energy audit on the County's 8 Facilities; Including the brand new, state-of-the-art, Scott County Courthouse and Jail.

Why does a 2 year old multi million dollar facility need an energy audit?
I doubt it does. However, the county had secured some grant money (AKA: Iowa taxpayer dollars) and when they found out the audit was going to cost less than expected on the 2 buildings that were originally slated for they decided to spend the rest because they thought it was better to find a place to "spend, spend, spend" instead of patting themselves on the back for what could have been a $90,000 savings to the state.

This is called unchecked spending.
This is why I am running for office.

What does this have to do with Labor/Jobs in Scott County?
Couldn't a local business perform this energy audit so that Iowa tax dollars would go to Iowans (or even somewhere local on the QC Illinois side)? The County Board Chairwoman, Chris Gallin, did ask this question (which I commend). However, she was told by a staff member that no one in the area performed energy audits as a "primary function". I've talked to several local workers who say their company or union is more than capable of performing energy audits and doing just as well as any outfit from Chicago. Maybe the county didn't look hard enough or maybe they don't know much about the issue.

I know this is just one small example, but what do you think about this? Is a $100,000+ project not worth more diligence than this. What about spending the money on more buildings instead of taking the savings? Is grant money burning a hole in the county pocketbook? Is this how you manage your personal finances ("spend it if ya got it")? Finally, if an energy audit is needed on a 2 year old facility then the oversight of that building project was probably mismanaged in the first place.